I read Brother Lawrence’s The Practice of the Presence of God when I was a seventeen, I think. It quickly became one of my treasured books. I read A Man For All Seasons and watched the movie. St. Thomas More was the man! I read Tolkein and Lewis. At my wedding my Bridesmaids carried the Prayer of St. Francis in the language of flowers and herbs and the prayer was written in the wedding program. Shortly after I got married I read St. Augustine’s Confessions. I wanted to name my next son Augustine, but my husband vetoed that. I read St. Basil The Great and how he defended the church against heresy, how he wouldn’t embrace unity at the price of orthodoxy. I wanted to name my next son Basil. Too artsy-fartsy, my husband said. (and he’s probably right…)

When Mother Teresa died I kept the newspapers that announced her death and reported on her funeral. She was my hero. 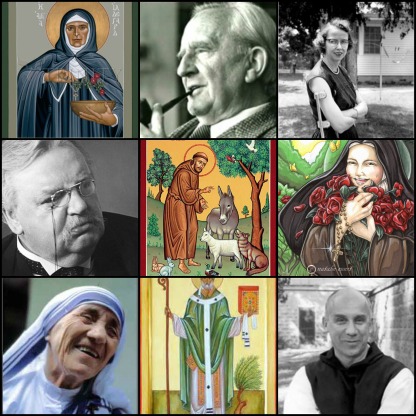 Through their writings over the years I have fallen in love with Flannery O’Connor, St. Therese of Lisieux, St. Hildegard Von Bingen, Brennan Manning, Thomas Merton.  GK Chesterton is like my BFF–I mean who else can write an entire essay on Stilton AND a book like Orthodoxy???

After a while it occurred to me that so many–not all, but most–of my favorite writers were very Catholic.  By far my favorite theologians were Catholic. I could read Chesterton all day long and I carry Hildegard around in my purse. And it’s not that I haven’t been exposed to a wide array of theological thought. As my husband was going through Seminary I would read most of his books, simply because I find theology rather fascinating. (Maybe I should have officially enrolled…) I’ve read Quakers and Reformed theology. I’ve read Karl Barth and John Calvin. I’ve read them all. The ones I return to over and over again, the ones I read and ponder and send quotes out of to my friends–are the Catholic writers.

And there was always this….thing. This big elephant in the room of theological thought. This writer is amazing and spot-on when it comes to everything—except that they are Catholic. They are right on everything, except that whole Pope thing. They are the most converted person I have ever read, except that Marian theology.

How could I with any intellectual integrity make these distinctions?!

Growing up I heard such thing as, “Some Catholics are really saved. Some are just caught up in empty religion.” (As if the same thing could not be said for every single Protestant denomination I know!) It was always said with the flavor of “very few Catholics are really saved. The majority are caught up in empty religion.”  I gave mental assent to that. Until…..

Well, I found myself nearly surrounded with Catholics! And they were all Jesus-loving, genuine, beautiful people who were faithful and devout and thoughtful and intentional. If the premise were true that most Catholics were just mindless sheeple or worse–idolaters–how is it that all the Catholics I knew weren’t? Did I just happen to become friends with all the genuine ones?! Well, that just didn’t make any sense.

My favorite writers. My favorite theologians. My favorite people. Catholics.  Something was not adding up.  Either they were all wrong or I was. Because the kinship I felt with them, the truth I saw leap from their writings, the beauty of their holy lives–could not come from nothing. A bad tree does not bear so much good fruit.

“…she was converted to the religion she already believed in, and her imitation of Christ began.” (Paul Elie writing about Flannery O’Connor)

2 thoughts on “The Greats and Real Christians”

What are you looking for?

About what are you curious?

Leaving work when you can stand in the middle of the street in a snowstorm. Would be such a meet-cute moment in a hallmark movie if a snow plow driver almost ran me over. Alas, no such luck.
Sunday Family Brunch on the last Sunday of Epiphany. Cocktails or mocktails all around. Lamb chops, jalapeños bacon poppers, scrambled eggs, two kinds of muffins.
If I start throwing a pity party and invite my oldest daughter she will make me a playlist to fit my mood and bring dark chocolate. If I tell my oldest son he will pour shots of tequila and make a toast using the words of Rilke about calling forth my life’s beauty. If I tell my next son he will swear appropriately and ask if I need money. If my next son Captain there will be hot chai with oatmilk. If I tell my bestie Kristy she will tell me to do some breathing exercises focusing on the true, good, and beautiful. She will say she is proud of me. If I tell my friend Emily she will say something ironically judgy and tell me I’m pretty. She is always a whole vibe. If I tell my friend Jeff he will tell me to immediately name three things for which I am thankful and he will set his alarm to pray for me consistently. If I tell my friend Jimmy he will say “Follow strength. If you want to be strong, do the strong thing.” If I invite Isaac there will be memes and so much active listening it’s like emotional cardio. If I tell Phil the musician he will send me angry music to blast and drop an F-bomb, which somehow always makes me feel better. If I tell Maureen she will say a flying Novena to St. Joseph. If I invite Mazel to the party she will bring French fries and scotch.
On the day my exhusband left he told me that no one would ever love me and not to expect my “fancy church friends” to come to my aid. “You will always be alone and suffering without me, I promise you that.”
Today is the feast of St. Peter in Chains. Here I am in 2010 venerating his chains in Rome, a full six years before I would be received into the Church.
Sunday drinks and eats:
Loading Comments...
%d bloggers like this: